About The Folkestone Marine Reserve

Home About The Folkestone Marine Reserve 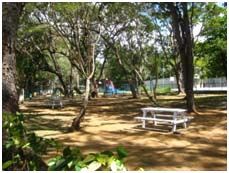 The historical significance of the Folkestone area dates back to 1625 when English explorers landed near present-day Holetown and claimed Barbados in the name of James 1, King of England.  The explorers named the area St. James Town but later changed it to Holetown because the shallow-draught ships could enter the river at this point apparently reminding the sailors of the Hole on the River Thames.  The first settlers arrived in the area in 1627 making Holetown the oldest town in Barbados.

The name of the property celebrates the marriage of Rebecca Alleyne (born 11 October 1725 in the parish of St. James) to the Hon. Williams Bouverie, the second Lord Folkestone.  The couple were married at St. James Parish Church on 5 September 1751.

The house, Folkestone House, once the residence of the Parochial Medical Officer for St. James, was previously known as Church Point House.   In the 20th century it became the site of local government for the parish of St. James, and was occupied by the Chief Medical Officer.  Among its residents was Dr. Gibbons.  At one time it housed offices of the Land Tax Department.

The 1910 report states that this was once Church Point Battery, and in 1762 mounted eleven canons, so placed that Holetown could be defended, with gunner’s quarters being accommodated there.

Folkstone Park, operated by the National Conservation Commission provides a number of facilities for the enjoyment of the public.  There is a Visitor’s Center; a snorkel equipment rental shop; souvenir shop; picnic tables; children’s playground, tennis and basketball courts; washroom and changing facilities and car park facilities.  Lifeguard and Ranger/Warden services are also provided.

The Folkestone Marine Reserve was established in 1981 and is the first and to date, the only legislated Marine Protected Area in Barbados.  It extends from just north of the Coral Reef Club Hotel for a distance of 2.1 km to the southern edge of the Sandy Lane Hotel property in the south.  Its width varies between 650 and 950 meters from shore. 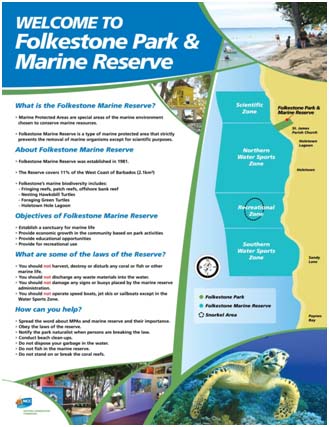 Things that you should not do in the Folkestone Marine Reserve. 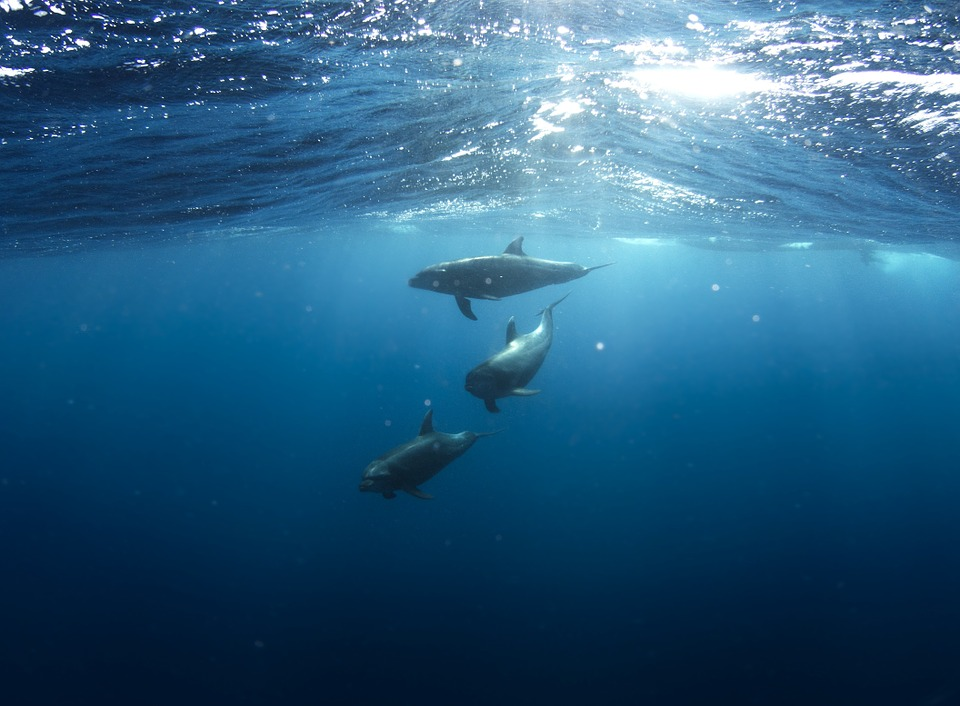 1. Become a Junior Coral Reef Ambassador.
2. Spread the word about the importance of coral reefs and marine organisms to your friends and family.
3. Conserve water. The less water you use the less run-off and waste water that eventually find its way in to the marine environment.
4. Be an educated consumer. Do not buy any objects made from coral particularly jewellery even if it was brought from another country. If the jewellery is from another country, you cannot be certain that the coral was harvested sustainably. Also refrain from buying marine aquarium fish.
5. Do not pollute. Never put garbage or any waste material in the water. Don’t leave garbage on the beach.
6. Rcycle Start a recycling programme at your school or in your community.
7. Participate in gully or beach-cleanups to prevent waste materials from entering the marine environment. Encourage divers in your family to
participate in underwater clean-ups.
8. Get involved in projects related to the Folkestone Marine Reserve or the marine environment.
9. Inform yourself. Learn about coral reefs, marine organisms and activities that can threaten marine life. Learn also about the laws protecting
the marine reserve to ensure that others are following the laws.
10. Discover the marine environment. Take an underwater trip in the Atlantis Submarine or take a glass bottom boat ride.